Terry Fox is a real hero in my eyes, he someone that inspires without trying to; he’s someone that leads by example, doesn’t know what ‘giving up is’ and he’s someone many people don’t even know about. Admittedly so, I didn’t know as much as I should have been a Canadian.  Terry Fox lost his leg to a dis-ease his body in which he turned into a positive. That’s right, he turned what would crush most people into something that would inspire a Nation by doing something most people hadn’t even thought of.

Planning to run across Canada to show others that a lost limb or a dis-ease wouldn’t hold him back and shouldn’t hold others back in the same situation. Unfortunately Terry Fox wasn’t able to finish the run, he made it half way before his dis-ease moved into his lungs and eventually ended his life. The hardest part to watch during the documentary I did was how Terry Fox was so emotional when he shared news that he wouldn’t be able to continue. I understood that Terry wasn’t upset his lungs were now infected but that he wouldn’t be able to carry on with his run and set out to do what he said he would. I know he felt like he disappointed so many when quite the opposite occurred. He inspired millions and what gets me is more haven’t positively been influenced.

The problem is, not many people know about him. You could look at the morning news on a day like today when many schools and children are ‘running for Terry Fox’ and you hear nothing about it. You hear more about terrorism, accidents and tragedies than anything close to what Terry did for his country.

It’s the backwards world we live in where gossip is more interesting than the ‘buzz’ with celebrities, or the last accident or murder. Today I choose to think about Terry Fox and all he did for us.  Today I hope we can all make a higher decision for ourselves and understand what we watch, listen to and hear is a choice. 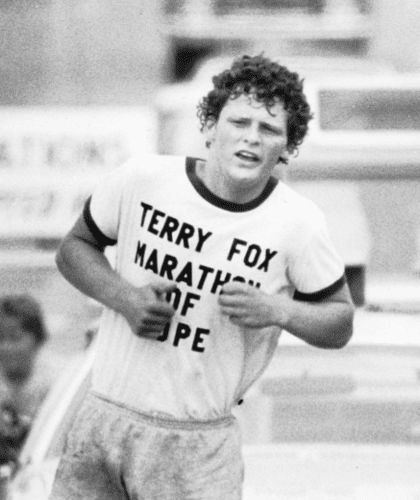 Terry Fox inspired millions on his quest to run across Canada