Skip to content
Home » All Past Shows » EMB #131: Living a Vegan Lifestyle

Living a vegan lifestyle is a hot topic in todays day in age of people trying to live healthier lifestyles.  This is something I actually consider myself at times, I do eat mainly a plant based diet but jumping into a full fledged vegan lifestyle isn’t something I’m quite ready for.  What I did for you and me as well is invite Bob Linden on the show who’s been living a Vegan lifestyle for over 29 years!  So who better to learn from and find out more about this lifestyle.  As you’ll hear in the interview Bob is very passionate about this subject, he’s actually an animal rights activist and even hosts his own show on Go Vegan Radio, and he’s been doing that for over 15 years.  I couldn’t be happier to have Bob on the show sharing his knowledge with us. 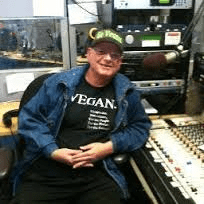 It really was a pleasure listening to someone talk about a subject who is as passionate as Bob is about living a vegan lifestyle; I really think learning from someone that lives a certain way and has experienced what they talk about means much more than someone who doesn’t actually live it.  As you’ll hear Bob talk about Veganism he is 100% Vegan, from what he eats to the clothes he wears, from top to bottom, internally as well Bob certainly represents the lifestyle of a Vegan.

It was cool to hear Bob talk about the early years when he first started to question animal products and how there may not even have been the label ‘vegan’ yet.  And then of course it was also nice to hear the perspective of someone that lives a vegan lifestyle because it’s certainly a different mindset than conventional thinking.

I hope you enjoy the show as much as I did, it’s certainly gives you a lot to think about if you’re considering living a vegan lifestyle or just want more information about it.  Here are some of the resources Bob shared on the show:

I just wanted to say a quick thank you again to Bob for coming on the show.  I really enjoyed what he had to say and am grateful he made time to share his years of living a vegan lifestyle with us.

Thanks so much for checking out this post and listening to the show to all of you out there.  If you have any questions or comments please leave them below.  Other than that, all the best in living a vegan lifestyle!