Skip to content
Home » All Past Shows » EMB #112: College Athletes

There’s not much more that drives me crazy when I see a college athlete that come to the gym, talk, wander around, lift a few weights and then go home.  I wish they could sit across from someone that never had the opportunity they had.  Maybe someone that hung out with the wrong crowd and chose a different path, someone that couldn’t afford to go to college, someone that wasn’t good enough to play.  Each and every one of these people would say it’s a blessing to go to school and be able to play sports, they’d say, I wish I was you or I’d give anything to compete at this level.

And the tragedy of all this is, most athletes would shrug their shoulders and not think much about what’s been given to them.  Granted my athletes work for what they have, there’s more that cruise around, have no idea how fortunate they are and squander their opportunity.

I played with incredible baseball players in college.  I went to college in California where baseball was the top three in the Unites States.  Course in California they’d tell you it was number one, I played with guys that were good enough to play pro no questions asked.  They were good enough to be on tv and shine but they had no idea their potential.  They had no idea what they were giving up by not working hard, by not going to school, by not showing up early and leaving late for practice.  The saddest part is they’ll never know; I’m not sure many of them had the brains to realize what they gave up so that’s probably a blessing in disguise.

I train at a gym that college athletes train at, I grew up in a gym, on the field and surrounded by college athletes and it wasn’t that long ago.  I know exactly what it is they’re thinking, I know what they do when they workout, what they eat when they go to their apartment or the dorm room and how they feel after.  Some of them I wish I could shake, just for a second, haha, yes I said shake.  Course hind sight is always 20/20, but I have the luxury of saying I always left everything I had wherever I was, weather that be on the field, gym or classroom.

In the classroom I studied hard, I wasn’t a great student by any means, I often worked hard just to stay in the class, to stay on the field.  I left the gym in pain just about every workout, I was always one of the first to show up at practice and one of the last to leave.  I practiced how I played, didn’t take time off and never took what I had for granted.  No I’m not on tv getting paid millions but I’ll never have to sit back and wonder what if, I’ll never have to think, if I tried just a little harder, if I stayed a little longer at practice.  Nothing keeps me up at night I can promise you that.  When I was in Australia I dove in the field one practice in the playoffs and broke my finger and hand.  Some of the guys I talked to later couldn’t believe I broke my hand in practice during the playoffs no less.

You know what the thing was, I didn’t know how to take a play off, I didn’t know how to take it easy.  Every hit to my position in practice was like a game, I was going full tilt and that’s who I was.  So yeah I broke my hand, it wasn’t the best idea especially given the time frame but I wouldn’t take it back and I wouldn’t change how I played.  But if I could give one small suggestion, if I could an ounce of advise to any athlete that may be listening, I’d say take advantage of what you have.  Stay late, if you think you’re playing hard, play harder.  Show up early, hit the weights like you should and don’t take a day for granted because you only have so long to be a college athlete.  It will be over in the blink of an eye and when it’s all said and done, when those 4 or 5 years are over you’ll be the only one that will look in the mirror and know the truth.  Could you have moved on, did you want to, did you put in the work, time and effort it takes.  Many will leave with excuses, few will move forward but deep down only you’ll know why.  You’ll have your whole life to say I was a college athlete and only a few moments to live it. 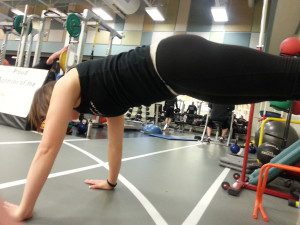 The summary is shorter than most of my show notes, that’s because I open my background up to you as a college athlete and share my experiences with you.  I talk about hat it was like to grow up in Canada and become a US college athlete.  How I made the team and through nutrition and exercise was able to stand out and excel to higher levels.  I talk about what supplements did to me and why I don’t use them anymore and I also welcome the new athletes the right here in Olds, AB wish them all the best and hopefully share some inspiring words that will help them be the best they can while they’re an athlete.

Thanks so much for tuning in or reading this post, I hope my story and the background I went through is able to help you as a parent, athlete or someone looking to excel in another field, get better and be the best you can be.  If you have any questions I’d be happy to answer them, you can ask below.